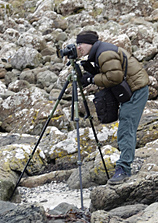 Alan Forsyth, is a Scottish photographer, based in scenic Cowal, Argyll, Scotland.

Alan’s lifelong interest in photography was nurtured from an early age, when he would accompany his father to the Aberdeen Camera Club. Continuously building on his learnings, Alan took his camera with him as he travelled about the world. He has lived and worked in both the UK and the US but his greatest inspiration is Scotland’s natural landscapes and the rugged beauty of its wild places.

Alan uses Nikon Digital SLR cameras and lenses for much of his work. He has been interested in digital photography since it first emerged in the late 1990s.

The light on the natural landscape is a vital theme in Alan’s photography. Using composition and artistry, he explores the moody, atmospheric weather conditions that make Scotland so unique.

“We quite often don’t take the time to stop and enjoy the beauty in the landscape that surrounds us. Scotland offers the photographer so much – the incredible natural landforms themselves, from mountains to coast, as well as the constantly varying colours and light produced by the changing seasons and weather. A well-known scene can be transformed by the appearance of interesting clouds, thrashing waves or a dusting of snow. There is always something new to see and appreciate.“

“I try to capture through my lens the essence of the impression that a stunning scene makes upon the viewer. I want my images to act as a reminder of how special a place we live in,” says Alan.

Alan is also fascinated by all things natural including native birds and other wildlife found around the local area, believing that nature offers solace and sanctuary from the busy world of humanity.

Alan has also done some nighttime astrophotography when the weather and sky visibility permits (not often here in Scotland!).

“Our natural place in the world is put into perspective when you gaze out into space. You realise our own insignificance on the tiny speck of dust in space that we call home. It’s mind-boggling when you think about it,” says Alan.