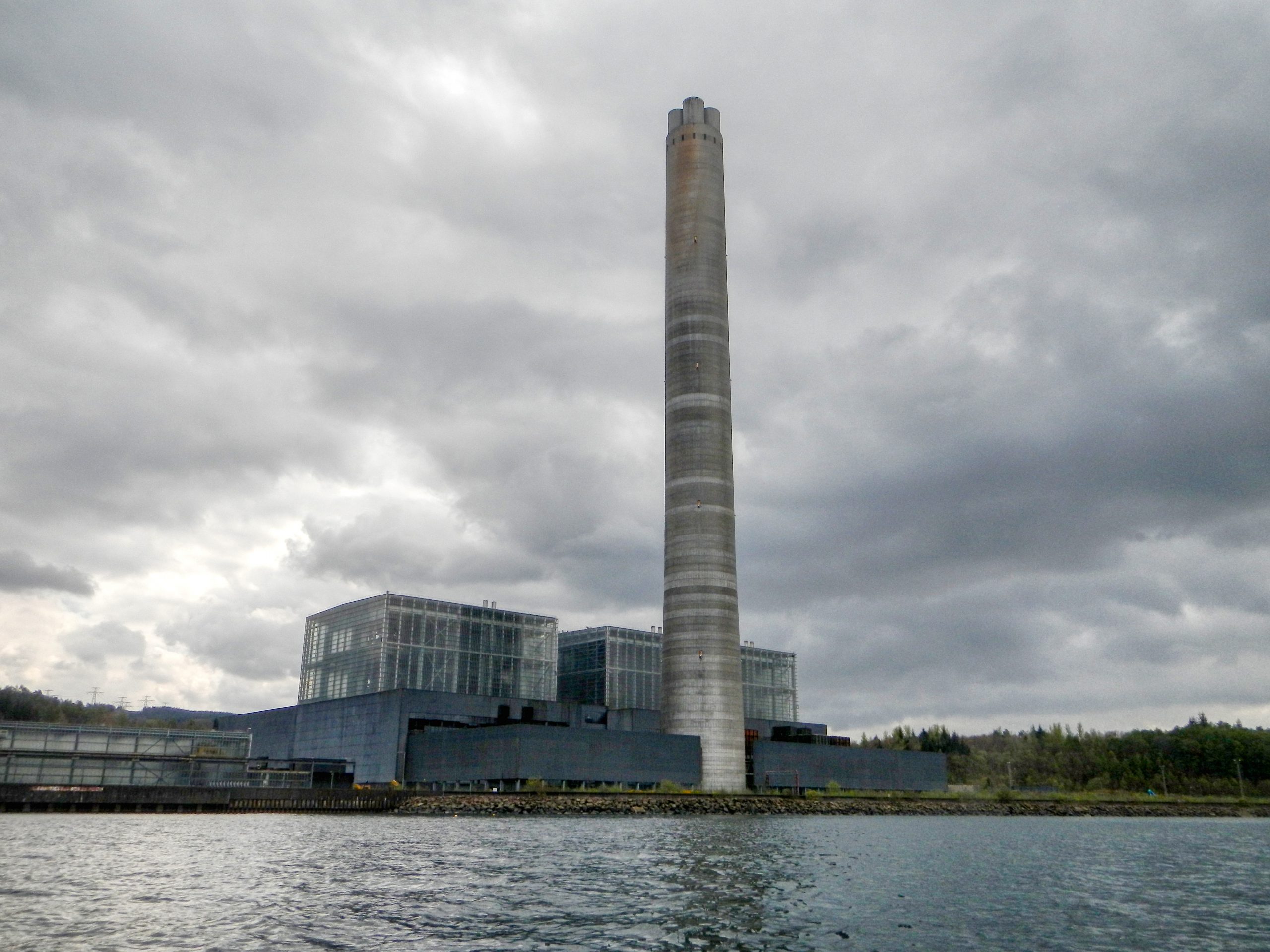 After perusing some old pictures of Inverkip Power Station, it got me thinking of how the structure was a such a huge integral feature of the western Clyde landscape for so many years. We take it’s absence now for granted and I can honestly say that the view is much better without it, but it certainly defined the views down the Clyde Estuary for the 40+ years of its existence. It seems odd not to note that memory.

The power station’s chimney came to dominate images of so many sunrises observed by myself from the Cowal side of the Clyde. There was no way to take a winter sunrise picture from south Cowal and avoid featuring the power station in it!

Inverkip power station (located slightly closer to Wemyss Bay than Inverkip) commenced construction in 1970, with approximately 1.4 million bricks and 20,000 tons of concrete being used during construction. The 778ft (237m) chimney stack was to become a prominent feature of the western Clyde and beyond. It was Scotland’s tallest man-made free standing structure, and was the third tallest chimney in the UK.

It was an oil-fired power station, but by the time of its completion, oil price increases had rendered it uneconomical to operate. It was utilised in a limited capacity in the 1980s during the miners’ strikes to meet power demand. Part of the plant was also held as a strategic reserve for many years, but eventually the station was mothballed in the 1990s before being finally decommissioned in 2006, and later demolished between 2010 and 2013.

The prominent nature of the plant’s chimney stack meant that it could be seen for many miles around. You could certainy see it from many mountain tops including the Arrochar Alps and beyond. It is said that some aircraft pilots used it to navigate with. It was also of sufficient height to warrant red navigation warning lights atop it, clearly visible at night.

The station also had a large pier/jetty structure in place, which has not so far (as of 2020) been removed. It projects out into the Clyde, and would have been the main point of delivery for the oil (by sea) that fuelled the station. Strikingly, the structure also featured an old red phone booth!

We explored the derelict pier by sea kayak on a trip from Cowal in 2008 and again in 2012. We were stuck by how much bird life was present on the jetty. Including many gulls, shags, cormorants and starlings. (More extensive images of the jetty are in the gallery attached at foot of this page).

By the 2010’s the site had been approved by the local authority for other use, and equipment was removed and some relocated as spares to other power stations around the UK ahead of demolition, which started in june 2010 (large oil tank) through 2013. The last main building – the Main Boiler Room – was demolished in Feb 2013.

Finally, the most prominent feature – the chimney stack itself was demolished on 28 July 2013 at the rather dusky hour of 10 pm, restoring a chunk of the Clyde estuary coastline back to being a less urban looking environment.

Below is a selection of my images featuring Inverkip Power Station (and its Jetty/Pier). Now long gone, but certainly by no means forgotten.

Note: All images are COPYRIGHT © Alan G Forsyth Photography. Any use of these images is subject to the approval of the copyright owner. Please use the contact page to make any enquiry before use.

You can pick up picture framing supplies from his online shop.